The value of iterative design

For the better part of the past 3 years, I've been associated with Michael Barrow & the Tourists, a band from Provo, UT. Part of my role for the band has to been to design flyers, posters, album covers, and everything else under the sun that a band needs designed.

Recently I designed the artwork for "Sweet Honey", their first single of 2019. I went through six significant iterations on the design. Each iteration shows my design process and illustrates the path I took to get to the final design. 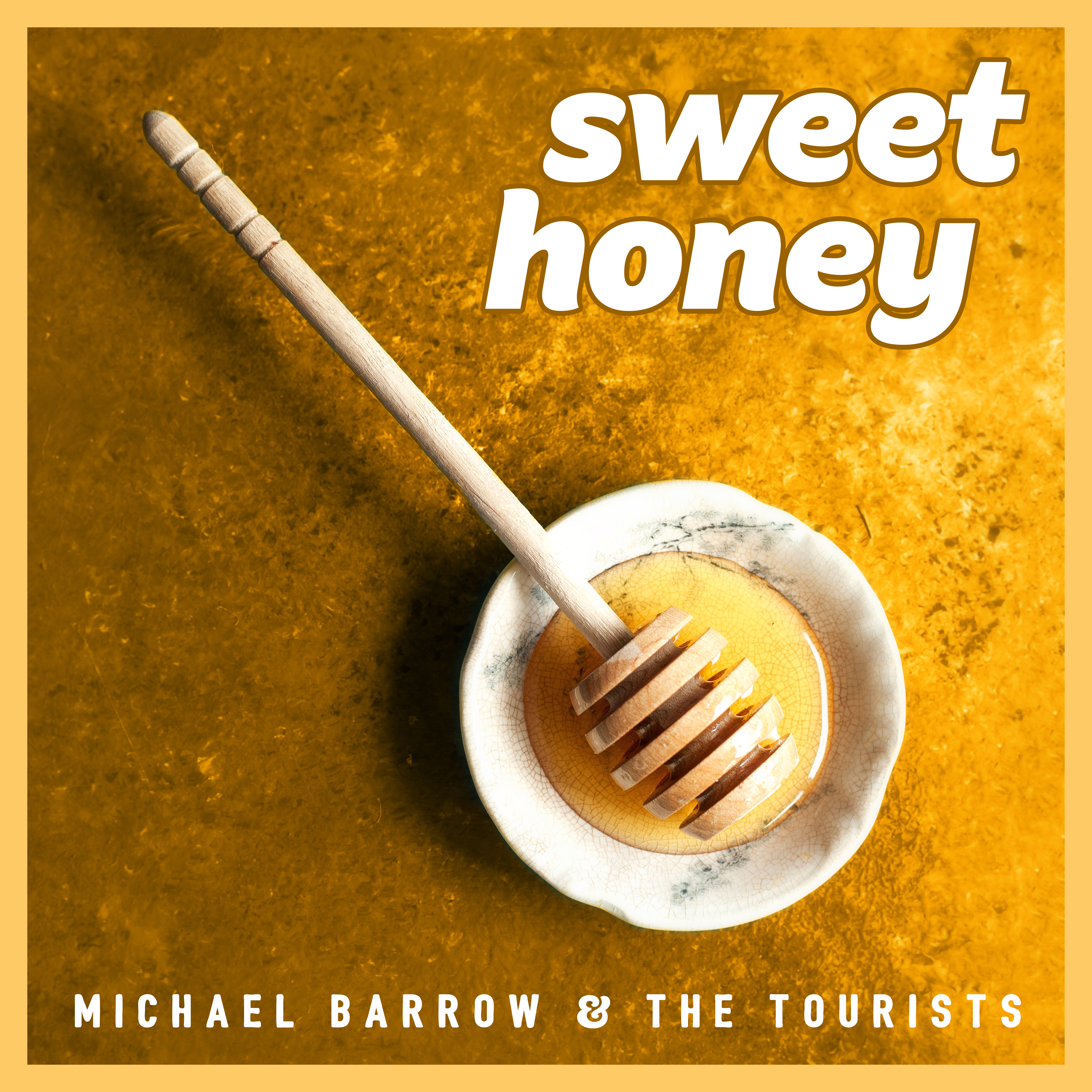 "Sweet Honey" sings about love with bee metaphors. The song's lyric feels overt at times, like the end of the chorus:

I wanna be with you baby / even if I get stung

I wanted to design an overtly-bee-related cover to match the lyric. I found an image of a honey dipper, did some color correction, and slapped some text and a border on it. After sitting on this design for a little while, it had three problems: 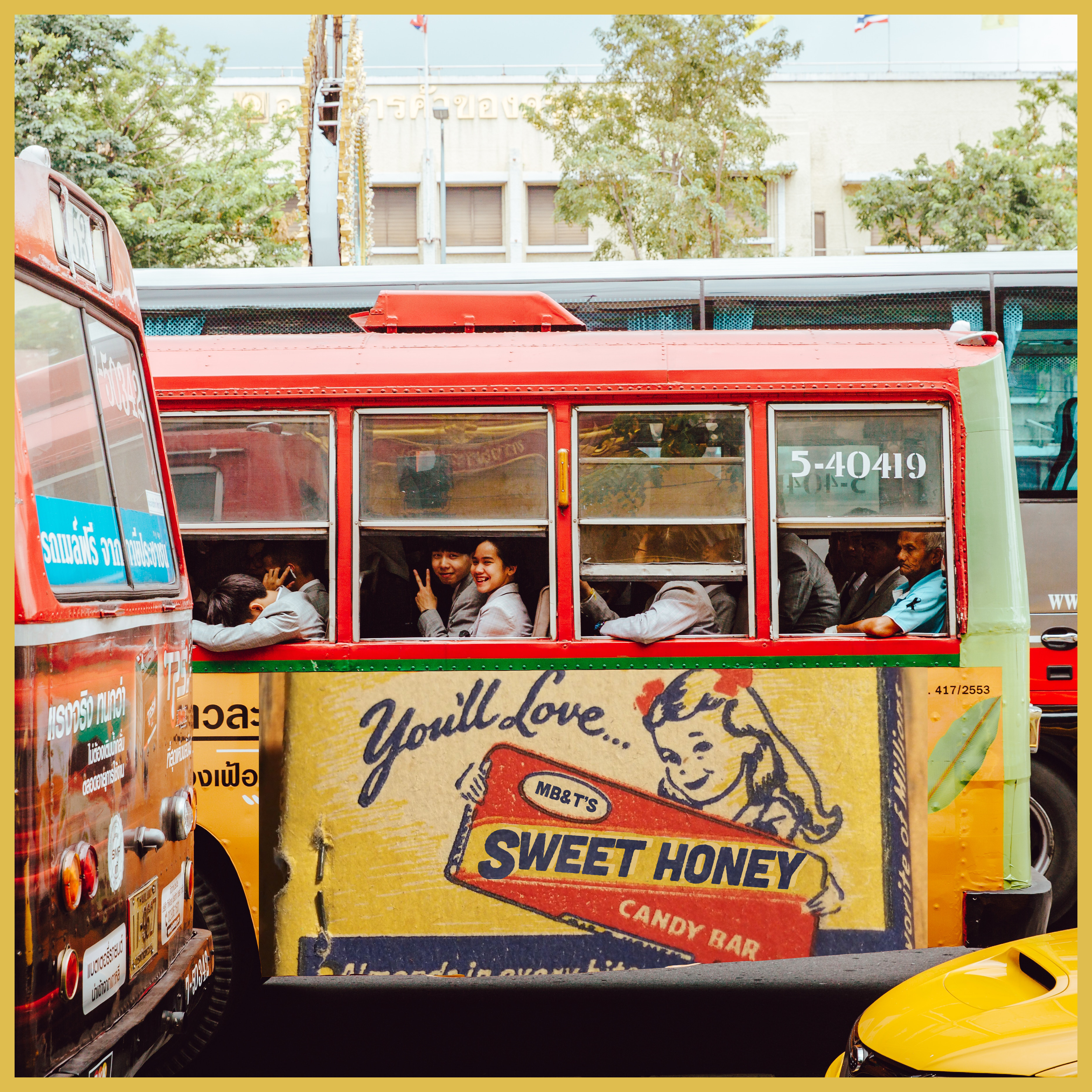 I decided to pursue an idea related to the band's name: Michael Barrow & the Tourists. I wanted to show Michael as "the tourist" in different countries. I also wanted to bring in a vintage element to the design. I found a vintage bit-o-honey container which I photoshopped "Sweet Honey" onto, and was in the process of integrating that as the advertisement on the side of the bus. My plan was to then add Michael as a "tourist" inside of the bus.

Despite having some positive feedback on this idea, I decided to abandon it for two reasons: 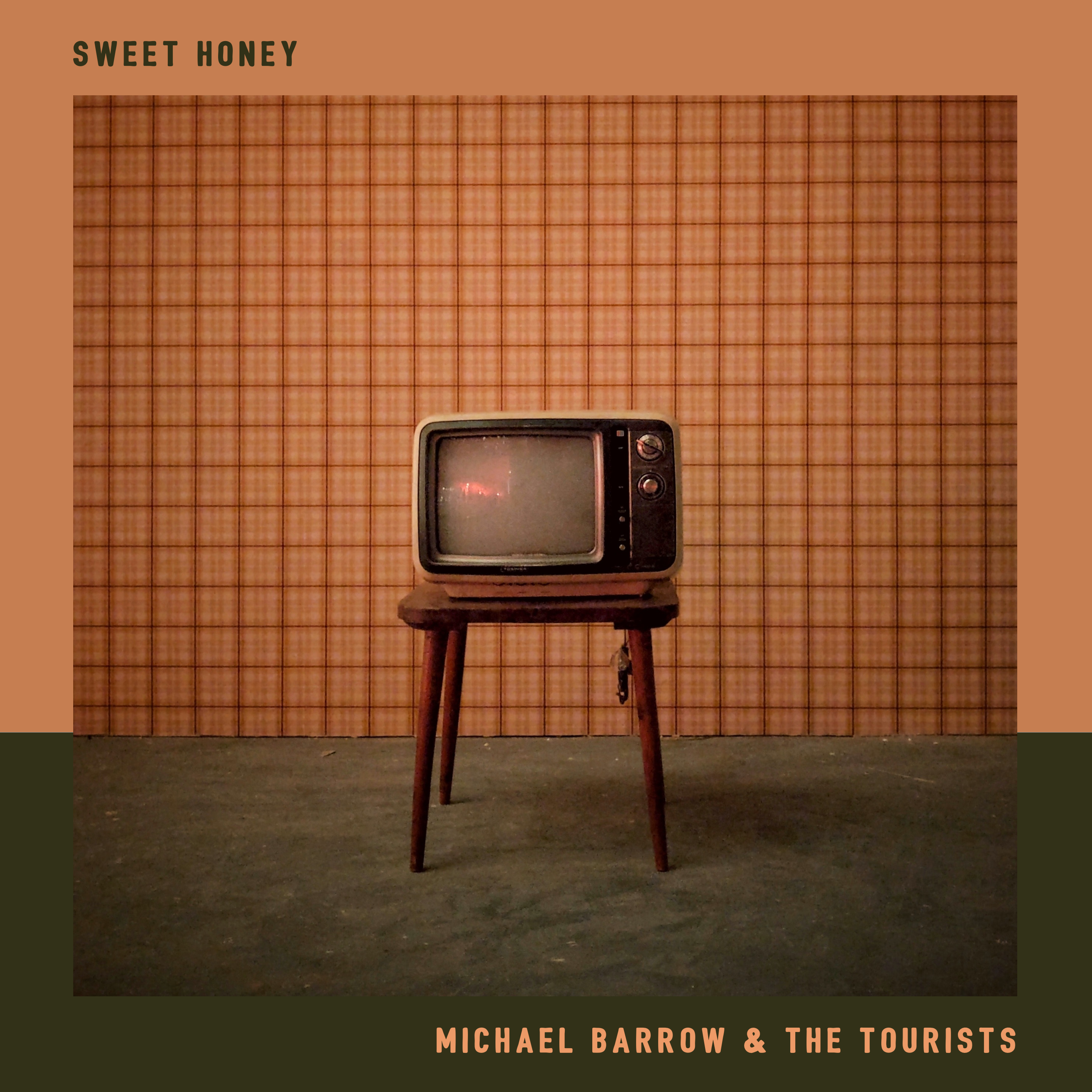 The vintage element of the bit-o-honey container stuck for future designs, and ended up influencing the photo choice for this iteration. The idea behind this design was to have a photo of a single object that represents the song somehow. It would make it easy for an easily replicated design for future design work.

However, this design was only loosely related to Sweet Honey. The television was appropriate only because we wanted something that felt vintage, and an old tube TV evoked that imagery. Even though it would be easy to re-create this design in other places, nothing about it felt connected with the song or the music created by Michael Barrow & the Tourists. 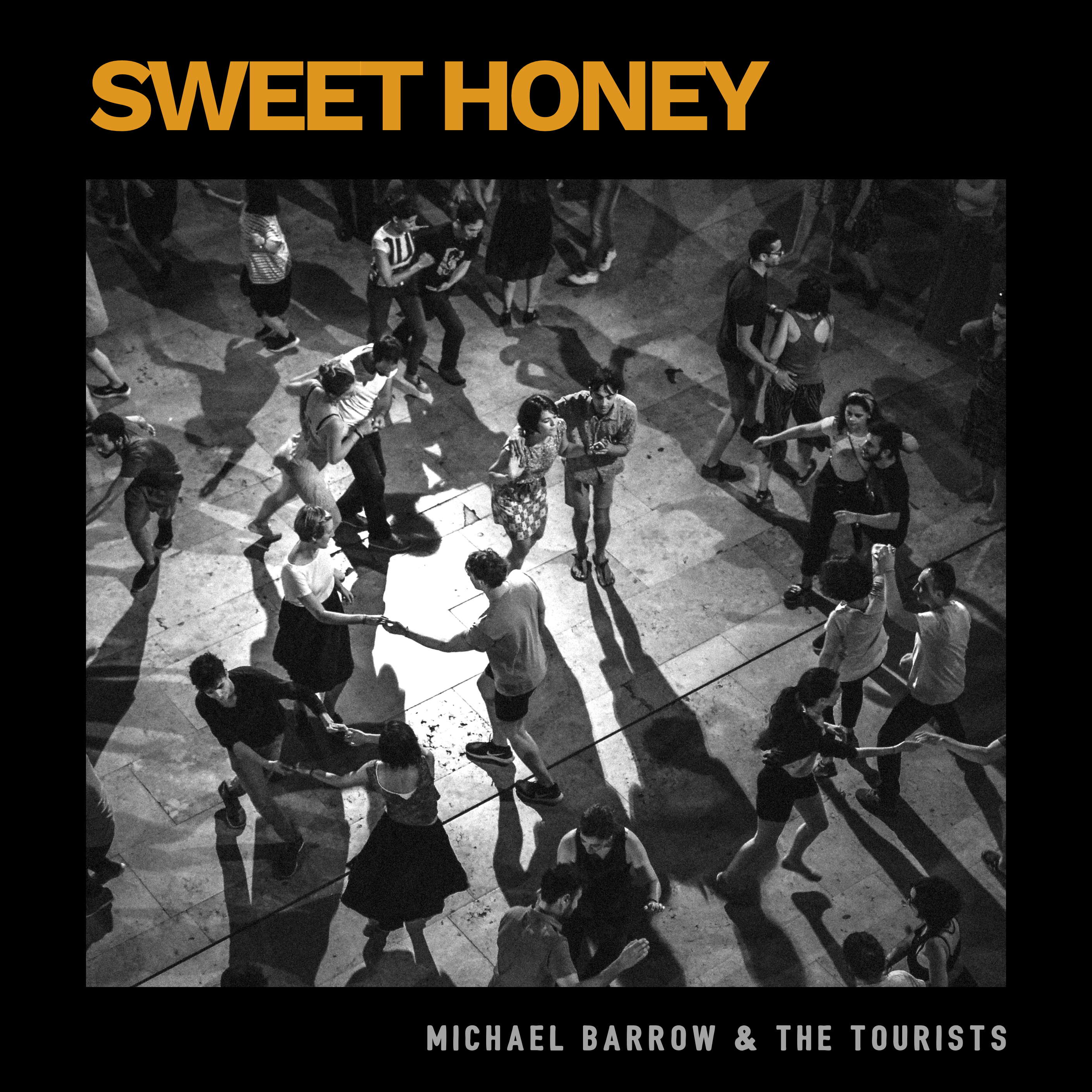 Shortly after the vintage television cover, I designed this as part of a series for other singles. The black and white photo was meant to add emotion to the image, and make the image feel more human (unlike how sterile the television felt).

The band had a positive response to this cover, but I felt like the design wasn't opinionated enough stylistically.

After the fourth iteration, I knew that there was a better design out there, but I hadn't found it yet. I decided to examine the successes and failures of each design. I also examined the song itself and how it was recorded. I came away from that study with three guiding principles:

I decided to look at old album covers, advertisements, and other designs from the 50's to get a sense for some of the design choices of that style. Zach Collier found an excellent old photo of a couple on a date, and I decided to start over with a blank canvas. 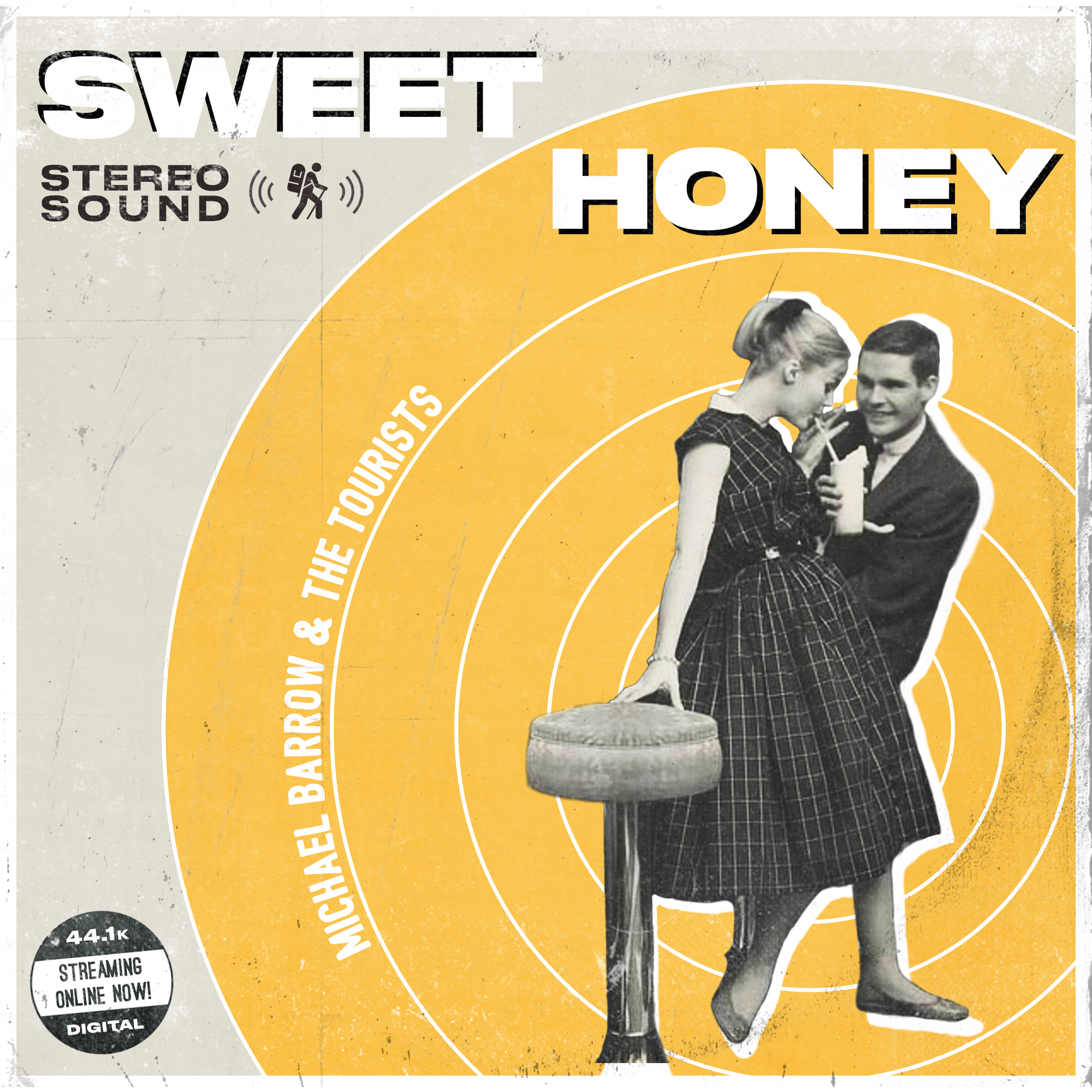 I started this design by selecting Druk Text Wide as an era-appropriate typeface for the "Sweet Honey" text. I extracted the couple, and then created the yellow circles that the couple floats on. I then added the band's name (using Bushcraft, their logo's font) and had it follow one of the edges of the circle, helping it blend in nicely with the rest of the design.

Once I finished some of the more critical parts of the design, I started working on the details. I added a shadow to the couple, and also added shadows to the "Sweet Honey" lettering. One of the design choices I noticed in old designs was non-global shadow angles (global shadow angles add to the sense that the light originates from a single source). I followed suit by inverting the shadow angle of just the word "Sweet".

I also noticed stickers and extra words like "stereo" or "hi-fi" on vintage covers, so created some of my own on this cover. As a finishing touch I added a border and then applied a nice layer of texture and grime to the design.

We submitted this iteration as the final design, but it was rejected because of some style guide rules ( we couldn't use the words "44.1k" and "digital" in the album cover because they were a reference to Sweet Honey being a digital product). 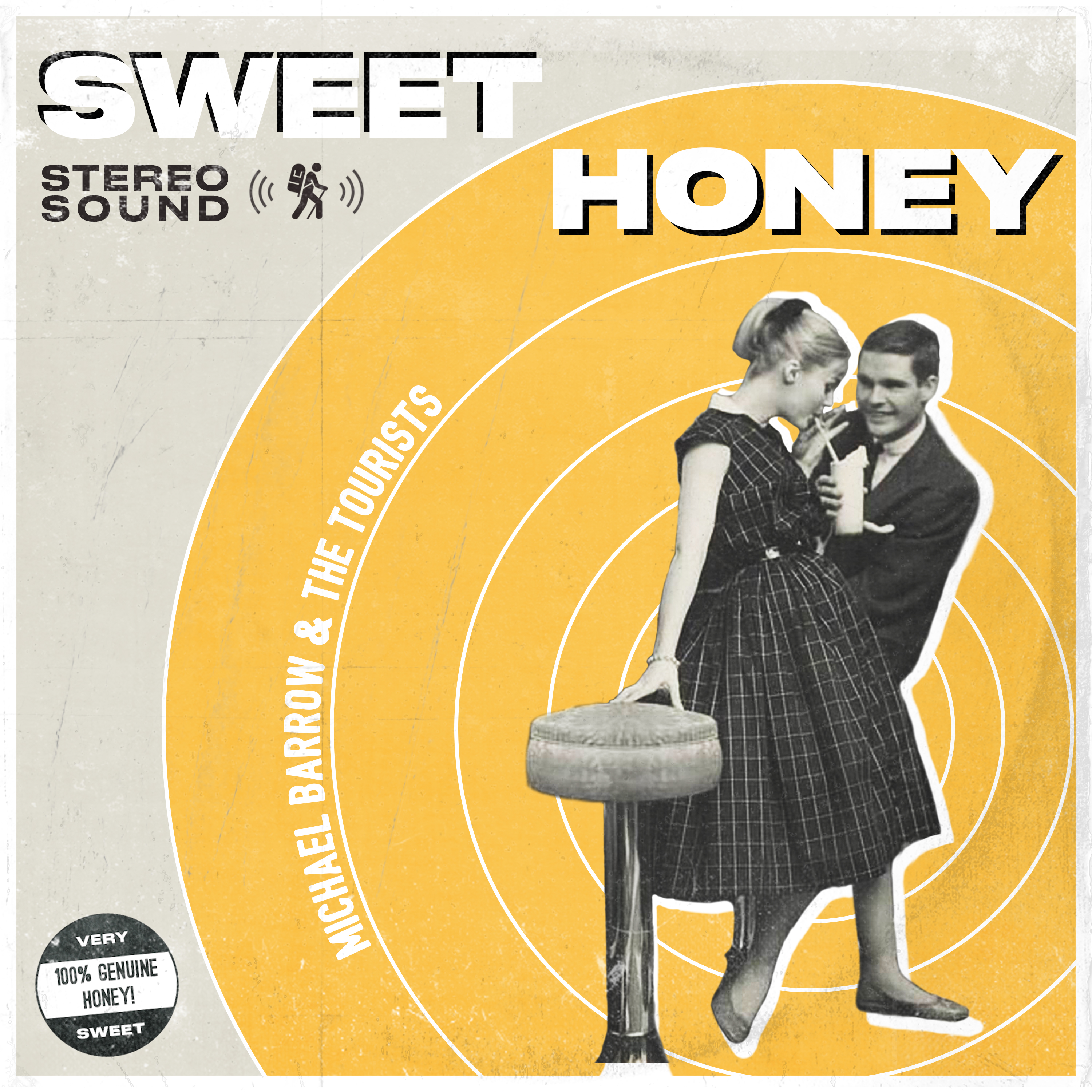 To fix the style guide issues, I changed the text on the sticker to read "Very Sweet" and "100% genuine honey!", instead of referencing anything digital. I also slightly changed the position of the sticker and pulled back the amount of "wear".

I started my first design sometime at the end of July 2018, and the final version was submitted at the end of January 2019. During those six months of iterations, I learned four lessons:

Iterating on creative work can be difficult, but produces better results in the end.